Ioannis Rekleitis slowly twirls a glass cup in his hand. Quietly, beneath his deep, Greek-accented voice, a metal straw clinks against the rim of the glass like a metronome, its ping, ping, ping providing a symbolic beat to his words.

“People have to be educated,” he says. “You drank your beer, or soda, or whatever – don’t drop it by the side of the boat. It’s going to decompose in the ocean and break down into microplastic. You’re going to eat it, or your grandchildren are going to eat it down the road.”

He tells of a giant island of plastic twice the size of Texas that floats in the middle of the ocean and predictions that say by the year 2050 there will be more plastic in the ocean than fish. Despite his unwavering avoidance of plastic straws and his burning desire to fix this growing environmental problem, he knows that the crisis is only getting worse. But through his research on underwater robots and autonomous boats called jetyaks, Rekleitis sees a way to improve water quality and create more resilient coral reefs.

“If we don’t have coral reefs, that means we would lose the fish living in them. They also clean the water, which in turn also helps humans survive. It’s this whole circle of life that is dependent on the coral reefs.”

“He’s here probably 16 hours a day, until 3 o’clock in the morning,” says Jason Moulton, a doctoral student who has worked in Rekleitis’ lab for three years. “I’ll stay here as long as I need to to get what I have to get done and when I leave in the middle of the night, I’ll look at his window above the parking garage, and he’s always in his office working.”

Rekleitis’ love for the water began as a young boy in Greece, where he enjoyed fishing, swimming, and more than anything, snorkeling in the nearby sea. For him, enjoying the water wasn’t really a conscious decision. It was the natural order of things.

“Everyone around me was snorkeling,” he says now of his young days spent by the sea. “It was obvious that I would snorkel, too.”

At South Carolina, a grant from NSF allowed him to buy two $100,000 underwater robots that are much smaller and more autonomous than the robots he first used at McGill. No longer does he swim behind them, controlling their every movement; they can swim around objects as long as they are first told the objects are there.

His hope is that one day, these robots will be able to detect and avoid obstacles on their own. He says, “In 10 years I would like to drop my robot by the side of the boat, or the entrance of the cave, or wherever, and have it go down by itself and come back a couple hours later with information of what is down there.”

While looking to expand these robots’ capabilities, Rekleitis is also exploring the impact these robots could have on the larger ocean environment. On the forefront of his mind is preserving the quickly disappearing coral reefs that he grew up marveling at through his snorkeling mask.

“Coral reefs are in trouble, and they have been in trouble for a while now,” he says. “We have no idea how they behave. We know they are in trouble, but we cannot tell exactly what is going on.”

Nare Karaperyan, another doctoral student working in his lab, succinctly states just how important the reefs are. She says, “If we don’t have coral reefs, that means we would lose the fish living in them. They also clean the water, which in turn also helps humans survive. It’s this whole circle of life that is dependent on the coral reefs.”

Rekleitis thinks the best way to protect coral reefs is to identify the coral species most resilient to temperature change and then repopulate it. To do so, he says, requires frequent surveys over coral reefs across the world.

The problem is that the current method of surveying is inefficient and unreliable. In Australia, snorkelers hold on to a board and are pulled by boat over the coral reefs. The board is pushed down and the snorkeler is sent under the water where they hold their breath and observe the state of the reef. They then come back to the surface and write down their observations.

“Not so good, right?” Rekleitis asks with a chuckle. He then explains his solution: developing an underwater robot that surveys autonomously. In his lab, this research has already begun.

Along with his research on underwater robots, Rekleitis is developing data-gathering jetyaks. Recently, he tested the jetyaks’ ability to survey and profile the Broad River’s riverbed using sonar technology. He says that so far, the results have been promising – showing to be more accurate than manual testing and twice as efficient. In the future, he sees jetyaks not only surveying the topography of rivers but also the quality of the water within them.

Rekleitis is doing everything he can to help combat increasing pollution in the world’s waters. He picks up bottles from the Broad River when he’s there, and he avoids plastic straws at all cost. But he also knows the reality of those actions and speaks frankly of them, just as he does the worsening environmental situation. He says, “Clearly me picking up 30 bottles off the side of the river, it’s nothing.”

When he speaks of his current research, though, color and life suddenly appear in his voice. He talks of underwater robots and jetyaks, focusing intently on the impact they can have in the future. Today, he may be sipping out of a metal straw, but in ten years, he may have the solution to the world’s growing clean water crisis. 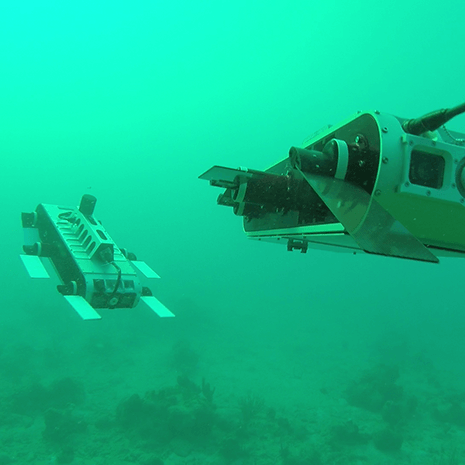 Rekleitis is using these underwater robots to survey coral reefs in a more efficient and reliable manner! 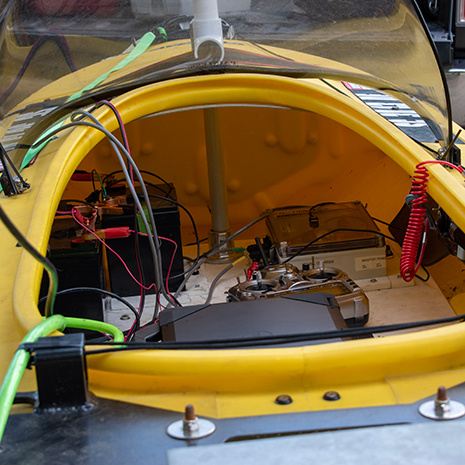 Rekleitis and his jetyaks have been enlisted by Paul Ziehl to help find a more efficient method to assess South Carolina's bridges.

For more photos from a recent field test, check out our Flickr here!