A Remembrance of the Orangeburg Massacre

On February 8, 1968, approximately 150 South Carolina State College and Claflin College students were protesting the racial segregation of a local bowling alley. Tensions rose between protestors and SC Highway Patrol officers. Three hundred protestors from South Carolina State College and Claflin University converged on the alley in a non-violent demonstration. A melee with the police ensued in which police beat two female students. The incensed students then smashed the windows of white-owned businesses along the route back to campus. The Governor sent in the state police and National Guard. By the end of the night, three students had been killed and at least 27 students were wounded.

Directed and produced by Bestor Cram and Judy Richardson, Scarred Justice: The Orangeburg Massacre 1968 brings to light one of the bloodiest tragedies of the Civil Rights era after four decades of deliberate denial. The killing of four white students at Kent State University in 1970 left an indelible stain on our national consciousness. But most Americans know nothing of the three black students killed at South Carolina State College in Orangeburg two years earlier.  The Museum of Education hosts a discussion following the film screening. 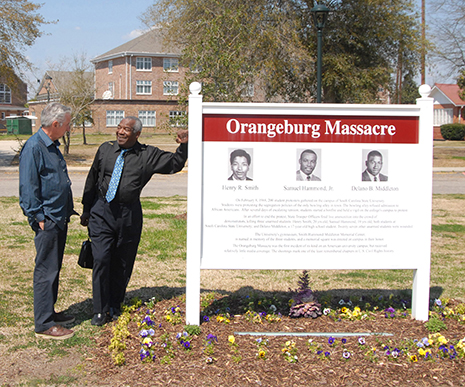 Tom Hayden and Chuck McDew at the Orangeburg Massacre memorial site in Orangeburg. After a screening of  Scarred Justice at the University of South Carolina, Hayden and McDew were so moved that they visited the site of the massacre.