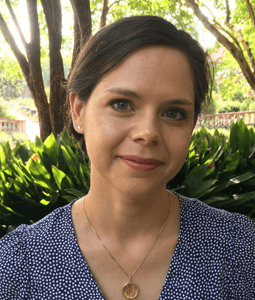 Ashley M. Williard’s research examines disability, gender, and race in the early modern francophone Atlantic. Her first book, entitled Engendering Islands: Sexuality, Reproduction, and Violence in the Early French Caribbean (Women and Gender in the Early Modern World series, University of Nebraska Press, 2021), argues that reconstructions of masculinity and femininity upheld slavery and nascent ideas of race in the seventeenth-century Antilles. Her research has been published in venues such as Early Modern Black Diaspora Studies, Early Modern Women, and Esprit Créateur among others.

Her second book project, currently entitled Disruptive Minds: Madness in the Early French Atlantic, examines the ways mediated voices of the "mad" can expose sites of subjectivity that interrogate colonial power structures and archival silences. The period she studies (c. 1660-1789) was pivotal for the rise of French imperialism, as well as new understandings and responses to mental disabilities. With a focus on individuals including enslaved men, exiled soldiers, creole wives, and manumitted women, the book represents a unique opportunity for interpreting how people negotiated, suffered under, and struggled against colonialism and slavery. This project has been generously supported by internal awards (Office of the Vice President for Research ASPIRE-I.1, College of Arts and Sciences Faculty Research Travel Initiative) and external grants (American Society for Eighteenth-Century Studies, National Endowment for the Humanities).

An assistant professor in the Francophone Studies Program, she teaches classes on the French language and the francophone world, including interdisciplinary courses she has created on topics such as Atlantic slavery, disability, and early modern gender. Before coming to South Carolina, she taught French and contributed to writing pedagogy and digital learning initiatives on several campuses of the City University of New York.