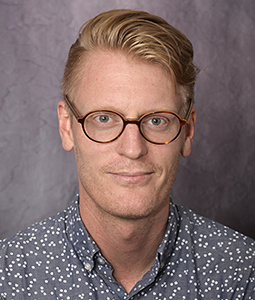 Gregory Patterson teaches courses in Chinese literature and culture, comparative literature, and Chinese language. His main areas of interest are medieval Chinese poetry (third to tenth centuries), traditional Chinese theories of literature, poetry and imperial institutions in medieval China, and modern interpretations of classical Chinese poetry. He is also interested in issues of cultural memory and media studies as they relate to literature in comparative perspective. His dissertation, “Elegies for Empire: The Poetics of Memory in the Late Work of Du Fu (712-770),” examines forms of mediated remembrance and identity construction in the writings of a major Chinese poet. Current research topics include nostalgia in late medieval verse (eighth and ninth centuries); the emergence of domestic life and the private dwelling as poetic subjects; and the ways in which late medieval poets wrote of and were impacted by concurrent changes in technology and transport. Professor Patterson has been the recipient of grants and fellowships from the Fulbright-Hays program, the Taipei Economic and Cultural Office, and the Chiang Ching-kuo Foundation.