The 2022 Equity and Inclusion Summit is an extended discussion of diversity, equity, accessibility, and inclusion within The College of Arts and Sciences and the broader community. The EI Summit creates a space for those actively engaged in race equity and inclusion efforts across the Southeast to lean on and learn from each other. This mini-conference brings together academics and activists to marry theory and action. It creates a network spanning the Southeast of people working toward race equity, inclusion, and accessibility.

The 2022 Equity and Inclusion Summit

This year we are focused on spatial dignity, the practice of consciously creating environments of respect and inclusion. It values the needs and well-being of each person in all spaces and interactions, regardless of ability or social position. Summit participants will gain concrete tools to incorporate spatial dignity into their communities and develop new practices for the benefit of all.

**All events will be recorded and made available on E&I Summit webpage following event.**

An explanation of the Standing Rock people and their resistance to the controversial construction of the Dakota Access Pipeline (DAPL) gained national and international attention when the U.S. Army Corps of Engineers accepted an application filed by Energy Transfer Partners, a Texas-based developer behind the project.

For over 25 years, Dr. Lee has worked with individuals and organizations to produce award-winning collaboration initiatives, organization-changing dialogues, and compelling arguments. His work focuses on the interplay between communication, culture, and diversity and how those can be harnessed to improve the workplace and other communities. He uses diversity circles, community deliberation, and collaborative art projects that incorporate social network theory with the pursuit of social justice to produce more innovative and responsive policies, practices, and procedures.

He is a relentless advocate for public debate and dialogue. He continues to serve as a national media commentator for U.S. Presidential Debates and the use of arguments in public discourse. He is routinely a guest on national and local media programs discussing debate and argument strategies and their impact on politics and interpersonal relationships.

The S.C. Sea Grant Consortium was created in 1978 as an independent state agency through Act No. 643 of South Carolina’s Code of Laws.

The South Carolina Youth Collective Fellows are social justice and civics minded high school students from across South Carolina. Students participate in community building exercises, learn civil rights history through activities and virtual field trips, plan to lead a workshop on race and reconciliation, and learn how to plan and implement a project in their home community.

The Equity Bus Tour will take a circuitous route beginning and ending at the University of South Carolina. The goal for the tour is to facilitate a discussion about inequalities in the capital city, especially health equity. Some points along the route include Columbia College in 29203, USC in 29208, and Sesquicentennial State Park in 29223.

Research has found that the “zip code effect” can affect life expectancy by as much as 30 years. In the Columbia area, residents in the Waverly neighborhood can expect to live ten years less than those in Forest Acres, just over two miles away.

There is ample parking available at the South Carolina State Museum. Attendees can also be dropped off at the door that leads directly into the Planetarium lobby. Comet buses 4 and 91 drop off at the museum.

Carolyn Finney, PhD is a storyteller, author and a cultural geographer who is deeply interested in issues related to identity, difference, creativity, and resilience. The aim of her work is to develop greater cultural competency within environmental organizations and institutions, challenge media outlets on their representation of difference, and increase awareness of how privilege shapes who gets to speak to environmental issues and determine policy and action. Carolyn is grounded in both artistic and intellectual ways of knowing - she pursed an acting career for eleven years, but five years of backpacking trips through Africa and Asia, and living in Nepal changed the course of her life. Motivated by these experiences, Carolyn returned to school after a 15-year absence to complete a B.A., M.A. (both of these degrees focused on gender and environmental issues in Kenya and Nepal, respectively) and Ph.D. (which focused on African Americans and environmental issues in the U.S.) She has been a Fulbright Scholar, a Canon National Parks Science Scholar and received a Mellon Postdoctoral Fellowship in Environmental Studies. Carolyn has worked with the media in various capacities including the Tavis Smiley Show, MSNBC, & Vice News Tonight; wrote Op-Eds for Outside Magazine & Newsweek; was a guest editor & contributor for a special section on Race & the National Parks in Orion Magazine; participated in a roundtable conversation with REI and The Atlantic; interviewed with various media outlets including NPR, Sierra Club, Boston Globe & National Geographic; and even filmed a commercial for Toyota that highlighted the importance of African Americans getting out into Nature. Along with public speaking, writing, consulting and teaching (she has held positions at Wellesley College, the University of California, Berkeley & the University of Kentucky), she served on the U.S. National Parks Advisory Board for eight years which assists the National Park Service in engaging in relations of reciprocity with diverse communities. Her first book, Black Faces, White Spaces: Reimagining the Relationship of African Americans to the Great Outdoors was released in 2014 (UNC Press).

Recent publications include “The Space Between the Words” (Harvard Design Journal Spring 2018), “A Thousand Oceans” (Geographical Research, Wiley Pub., Fall 2019) “This Moment” (River Rail: Occupy Colby Fall 2019), Self-Evident: Reflections on the Invisibility of Black Bodies in Environmental Histories (BESIDE Magazine, Montreal Spring 2020),”The Perils of Being Black in Public: We are all Christian Cooper and George Floyd (The Guardian, June 3rd 2020) and “Who Gets Left Out of the Great Outdoors Story?” (The NY Times November 4 2021), She is currently working on a performance piece entitled The N Word: Nature Revisited as part of a Mellon residency at the New York Botanical Gardens. Along with being the new columnist at the Earth Island Journal, she was recently awarded the Alexander and Ilse Melamid Medal from the American Geographical Society and is an artist-in-residence and the Environmental Studies Professor of Practice in the Franklin Environmental Center at Middlebury College.

The College of Arts and Sciences Diversity Committee will present some of the highlights of thier work from the past year.

Starting with darts, Michael Banner spits out a poignant point of view that stitches Island CultureZ across this American flag that’s representative of a  racial disparity that highlights a prison industrial complex that’s wielded against a mostly landless Black people here, even at this later date in history.  Michael Banner, more affectionately known as Magneto, comes to this work as a formerly incarcerated 3x felon who is redeeming himself with heavy fingerprints on the  radicalized Grassroots Agriculture Movement, building it in the very community setting where he participated in street activities during his troubled youth. This predominantly black historic community known as “Da Island” has a keen affinity with Banner’s story, so while paying homage and allowing him a few feet, at his beck and call to pass the operating tool, as his street smarts have deemed him supremely resourceful in working the scene with a surgical precision, from his co-piloting the Cooperative Extension’s Urban Farm School, to serving as the inaugural Chair for the City of Winston-Salem’s Urban Food Policy Council & City Council advisory board. Magneto’s experience in more diplomatic functions of Da Island, in elevating this narrative to a world stage, would not be possible without the bonds of solidarity having been formed with the pioneer of “Food Council” work in our city. Our two wits matched, have lit a fire in Winston-Salem, “and how I wish the flame had been kindled.” ~Magneto

Since 1994, we’ve remained a consumer-controlled, community-based, cross-disability nonprofit that seeks to make South Carolina a national model of equity and inclusion for all people with disabilities.

We are the state’s oldest and largest federally recognized disability-led organization.
More than 3/4 of our staff are people with disabilities, as are over half of our Board of Directors.
We practice equity, disability justice and representation, and true inclusion through consumer-driven independence and disability pride.

We didn’t just learn this.

As people with disabilities, our work doesn’t end when we leave the office. Disability is part of who we are. We live this every day.

There will be free parking available for community members on a first come first served basis in the lot directly across the street from the venue. Accessible parking is available upon request for all attendees, please contact Jennifer Gunter at gunter2@mailbox.sc.edu.  If you are a campus member with designated parking, please use this to allow free parking spaces for community members.

Please contact Jennifer Gunter, PhD, Director of the Collaborative on Race at gunter2@mailbox.sc.edu with questions or comments. 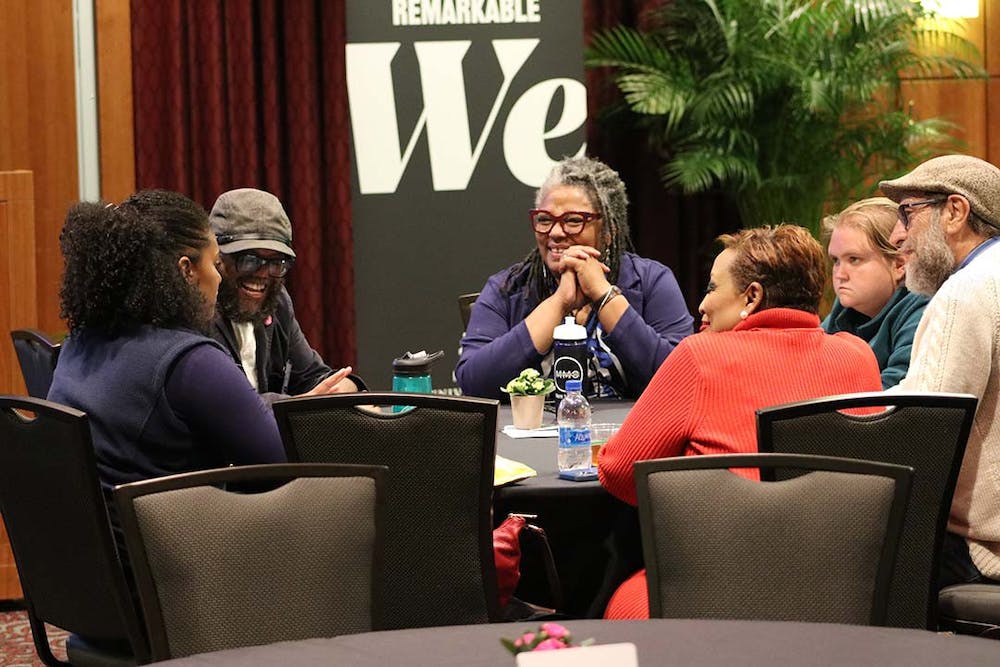 USC researchers and partners have recently engaged in multiple projects to learn the effects of Columbians' surroundings on their overall well-being. These efforts include bus tours around Columbia and environmental research.

Learn More about the 2022 Equity Summit