Every August, the University of South Carolina invites the new academic class to attend New Student Convocation, a ceremony commemorating your inclusion as a new student at the university.

An annual tradition, our Convocation is a special time for faculty, new students and families.

Along with new students and family members, additional participants include the President, the university's chief administrator; the Provost, the chief academic officer; representatives of the Board of Trustees, the institution’s governing body, to which the president of the university is responsible; and the deans of schools and colleges, the chief administrators and academic officers of their respective schools or colleges.

The primary participants in convocation are you and your classmates, who have come to South Carolina from all over the United States and around the world. Carolina is now your new "home." This day is all about you. Parents are not required to attend, but you may invite your family or friends or anyone with whom you want to share this experience. You will receive an invitation by email by early August. Once you receive the invitation, please complete the RSVP and indicate approximately how many guests will be attending with you.

Faculty are encouraged to RSVP and participate in New Student Convocation. Faculty are asked to honor this occasion by wearing their academic regalia and processing into the arena to be recognized as a group. As with commencement, faculty will gather in Locker Room No. 3 on the lower level of the arena to robe and then process in. After the ceremony, feel free to mingle with your colleagues and your new students at the reception.

The community of scholars at UofSC is dedicated to personal and academic excellence. Choosing to join the community obligates each member to a code of civilized behavior.

As a Carolinian…
I will practice personal and academic integrity;
I will respect the dignity of all persons;
I will respect the rights and property of others;
I will discourage bigotry, while striving to learn from differences in people, ideas and opinions;
I will demonstrate concern for others, their feelings, and their need for conditions which support their work and development.

Allegiance to these ideals  — our Carolinian Creed — requires each Carolinian to refrain from and discourage behaviors which threaten the freedom and respect every individual deserves. 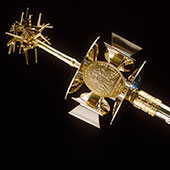 The Carolina Mace, fashioned by English silversmith Leslie Durbin, is the symbol of the university’s corporate entity and authority, as well as of the endeavors of the university community. The mace, dedicated in 1967, is carried in procession on occasions of importance by the president of student government. 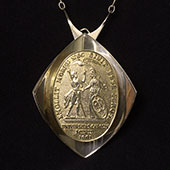 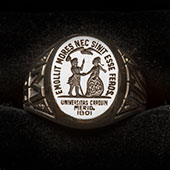 The university seal was adopted in 1803 and is comprised of two figures representing Liberty and Minerva, Roman goddess of wisdom, whose shield is a representation of the seal of the State of South Carolina.

The institution went through six reorganizations and a period of closure (1877-1880) during the last decades of the 19th century, while legislators, administrators, and faculties reassessed the institutions goals and struggled to define its mission. They reopened it in 1880 as an all-white agricultural college, and during the next 25 years the institution became enmeshed in the state’s political upheaval. South Carolina went through several reorganizations in which the curriculum changed and its status shifted from college to university and back again. The university also struggled to adjust to the arrival of intercollegiate athletics in 1892 and the admission of white women in 1894. Finally, in 1906, at the beginning of its second century, South Carolina was rechartered for the third, and last time, as the University of South Carolina, with the addition of a graduate school.

In 1963, the University of South Carolina became desegregated. As the result of a federal court order, Henrie D. Monteith, Robert Anderson, and James Solomon became the first African-American students to enroll at the university in the 20th century. Minority enrollment would continue to grow in their wake and was complemented by a substantial international student population in subsequent decades.

In addition to the research campus in Columbia, the university today includes three, four-year campuses (Aiken, Beaufort, Upstate) and four regional campuses (Lancaster, Salkehatchie, Sumter, Union) with a total enrollment of about 40,000. Of these students, nearly 30,000 are on the Columbia campus, which includes more than 5,900 graduate and professional students.

The University of South Carolina continues to build its programs for a bright future. Many academic programs rank in the top 25 nationally and the University 101 program for new students is among the best of its kind. UofSC’s University 101 program is ranked #1 in the nation for its first-year experience, according to U.S. News and World Report. In a ranking of public university honors colleges, UofSC received the highest designation awarded according to the guide, “A Review of Fifty Public University Honors Programs.”

Colleges and Schools of the University

The University of South Carolina includes eight university campuses, 14 degree-granting colleges and schools, as well as The Graduate School, founded in 1906, and Palmetto College, founded in 2013. Gonfalons are heraldic flags or banners first used by Italian medieval cities to display coats of arms or other insignia. In modern times, many universities have adopted colorful banners as part of academic ceremonies and commencement pageantry.

As South Carolina’s flagship university, UofSC is governed by a board of trustees appointed by the governor and state lawmakers. 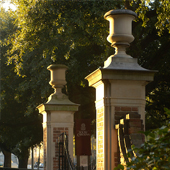 The board is made up of the governor, the state education superintendent, 16 members appointed by state lawmakers from each of the state’s judicial circuits and the president of the Alumni Association. The governor has an appointee and usually designates someone to fill the governor’s seat on the board. 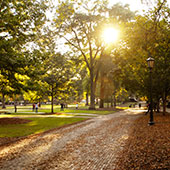 In addition to our president and board, our leadership includes positions governing academics, research, finances, giving, technology, human resources, student affairs, communications and our extended university.

Professor George Wauchope penned the alma mater in 1911. Generations of graduates have echoed his sentiment by offering a “health” to their beloved Carolina.

We hail thee, Carolina, and sign thy high praise;
With loyal devotion, rememb’ring the days;
When proudly we sought thee, thy children to be;
Here’s a health, Carolina, forever to thee!

RSVP New Student Convocation begins promptly at 11 a.m. on August 17 and lasts for about one hour. The Colonial Life Arena will open at 10 a.m. Let us know if you will attend.

Colonial Life Arena has a clear bag policy for all events including New Student Convocation. 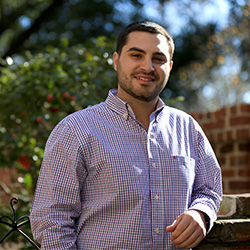 While there is no specific dress code for the event, convocation is the first academic gathering of your class and students and guests are encouraged to wear business casual.