Office of the Vice President for Research

Regular physical activity is a recommended strategy to prevent obesity via increasing fatty acid metabolism. AMP-activated protein kinase (AMPK) has been associated with the activation of lipolysis in adipose tissue. Furthermore, it has been demonstrated that a single bout of exercise increases AMPK activity in adipocytes; however, the mechanism by which AMPK regulates exercise-induced adipocyte metabolism has yet to be determined. To examine the role of AMPK in exercise-induced adipocyte metabolism, we utilized fat-specific AMPK alpha 1 and alpha 2 knockout mice (FKO). Wild type (WT) and FKO mice were divided into sedentary (Sed) and exercise (EX) groups. After 6 weeks of exercise training, there was no difference in body weight or food intake between the two groups. However, FKO mice showed significantly increased lean body composition (86.90% vs.83.89%) and decreased fat composition (13.10% vs. 16.21%) compared to WT (p<0.05). Also, FKO mice improved glucose tolerance compared to WT after 5 weeks of training (p<0.01). To determine whether AMPK regulates exerciseinduced lipolysis, we measured the phosphorylation of hormone-sensitive lipase (HSL) at Ser565, an AMPK phosphorylation site. The phosphorylation of HSL at Ser565 was significantly reduced in FKO mice (p<0.05). Furthermore, we examined if AMPK affects exercise-induced beige fat formation in white adipose tissue (WAT) by examining known fat browning markers UCP1, Cidea, and PRDM16. Although UCP1 mRNA expression did not differ, Cidea (p<0.01) and PRDM16 (p<0.01) mRNA expressions were significantly increased in FKO mice. In conclusion, our results demonstrate that manipulation of adipocyte AMPK may affect body fat composition, glucose homeostasis, lipolysis, and beige fat formation, suggesting its potential to serve as a therapeutic target for the treatment of various metabolic disorders.

Obesity has become a significant problem in the United States. More than 70% of adult Americans are considered overweight, and the rates of obesity and diabetes exceed 35% of the American population. This obesity epidemic has contributed to the increased prevalence of several chronic diseases in adults, as a BMI of 30 or higher is a proven risk factor in type two diabetes, hypertension, fatty liver disease, stroke, and certain cancers. Additionally, obesity has been demonstrated as a risk factor for cardiovascular disease, the leading cause of death in the United States (Singer & Lumeng, 2017; Stender et al., 2017). It has been reported that a reduction in adiposity improves diabetic glycemic control, thus limiting insulin resistance (Leong, King Sun, and John P. Wilding, 1999). Furthermore, increased physical activity and exercise training are well-supported treatments to increase adipocyte metabolism and limit obesity (Horowitz, J.F. and Klein, S., 2000). However, many of the underlying mechanisms that control the effects of exercise training on the regulation of adiposity are not fully understood.

One of the possible mechanisms involved in this regulation of adipocytes is the activation of AMP-activated protein kinase (AMPK) in adipose tissue. AMPK serves as an energy-sensing Serine/Threonine kinase. Playing key roles in glucose uptake and fatty acid oxidation, as well as other catabolic energy producing pathways, AMPK is an integral signaling molecule to regulate

glucose uptake in skeletal muscle in times of energy shortage (Towler & Hardie, 2007). Found in all eukaryotic cells, it is activated by increases in the cellular AMP/ATP ratio, which can be caused by producing too little ATP through deprivation of glucose or oxygen or by factors that exaggerate ATP consumption such as excessive muscle contraction and exercise. AMPK is activated through phosphorylation by an upstream kinase, such as LKB1 (Hwang, Kwon, & Yoon, 2009). Once activated, AMPK switches on catabolic pathways that generate ATP, while switching off ATP-consuming processes such as cell growth and proliferation.

The net effect of AMPK activation results in increased fatty acid oxidation and decreased glycerolipid synthesis, but the relevance of these findings in relationship to the ability of AMPK activation to decrease adiposity remains to be elucidated (Ruderman, N. B., H. Park, V. K. Kaushik, D. Dean, S. Constant, M. Prentki, and A. K. Saha, 2003). In this study, we chose to examine AMPK FKO’s impact on epididymal fat, as it is less studied than subcutaneous fat. Our preliminary data suggested that chronic exercise reduces fat mass and increases AMPK catalytic subunit activity in adipocytes (Fig. 1). However, the direct mechanism between the presence of AMPK signaling and exercise-induced adipocyte metabolism has yet to be determined.

Therefore, we hypothesize that AMPK plays an important role in exercise-induced adipocyte metabolism in mice, through the regulation of lipolysis, glucose homeostasis, brown fat formation, and adipocyte composition. 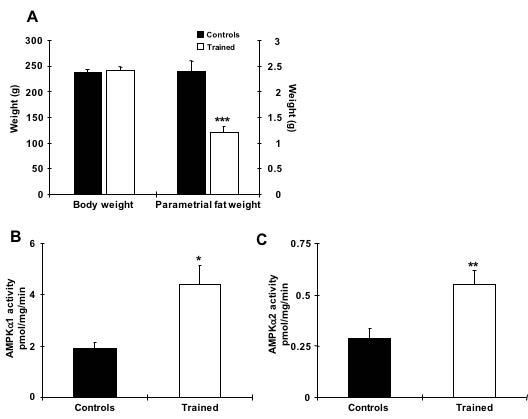 Fig. 1. Chronic exercise increases AMPK α1 and α2 activity in rat adipocytes. (A) Exercise training for 6 weeks efficiently reduced fat weight without altering body weight. (B and C) AMPK α1 and α2 activities in epididymal fat from rats trained for 6weeks and allowed to rest for 30 hours prior to study. n=6 per group. * indicates p<0.05, ** indicates p<0.01 vs. the control.

Protocols for animal use and experimental procedures were conducted in accordance with NIH guidelines and approved by the Institutional Animal Care and Use Committee of University of South Carolina. Fat-specific AMPK knockout mice were generated using the Cre-loxp recombination system by crossing C57BL/6 strain mice with floxed AMPK α1 and α2 genes, purchased from the Jackson Laboratory, with Adiponectin-Cre transgenic C57BL/6 mice that were gifted by Dr. Rosen at Beth Israel Deaconess Medical Center. Male AMPK FKO mice and their wild type littermates were maintained in a pathogen-free animal facility under standard 12- hour light/12-hour dark cycle, and were maintained on a chow diet (20% of calorie from fat; Lab Diet 5020). Mice were studied at 12-15 weeks of age, as specified in figure legends. Weekly measurements included body weight, blood glucose and food intake. DEXA scan measurements were taken before training, after week three and after week 6 of training. GTT was measured after week 5 of training.

Data are means ± S.E.M. All data were compared using Student’s t-test, one-way ANOVA, or two-way ANOVA. The differences between groups were considered significant when p < 0.05.

Food intake and body weight were measured weekly during 6 week training. Food intake between genotypes was unchanged (A), while body weight (B) change was significant only at week three of training (p = .036). Overall body composition was significantly improved in FKO groups. The post 3-week DEXA showed that average WT percent body fat was 21.43%, whereas average KO percent body fat was 16.38%. Similarly, the percent lean mass in WT mice was significantly lower after three weeks of treadmill training. WT average lean mass was 78.92%, while KO average lean mass was 83. 98%. This trend continued, such that after 6 weeks of training, the overall percent fat mass in trained FKO mice was significantly lower than those in WT trained groups (C) and the overall percent lean mass in trained FKO mice was significantly higher than those in the WT training group (D). Interestingly, H&E staining of epididymal fat tissue (E) confirmed that AMPK FKO increased adipocyte diameter (F) and cross-sectional area (G) in epididymal fat in the sedentary group; however, those effects were completely abolished in the exercise training group. Lastly, AMPK FKO significantly reduced epididymal fat pad weight in the exercise training group (H). 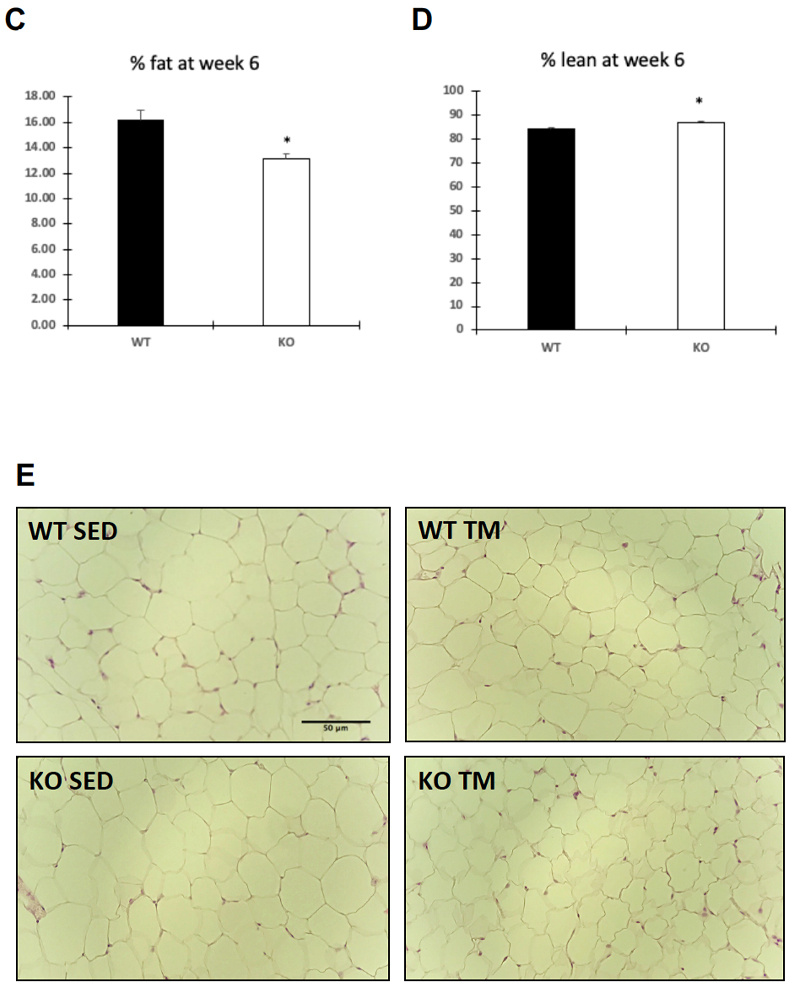 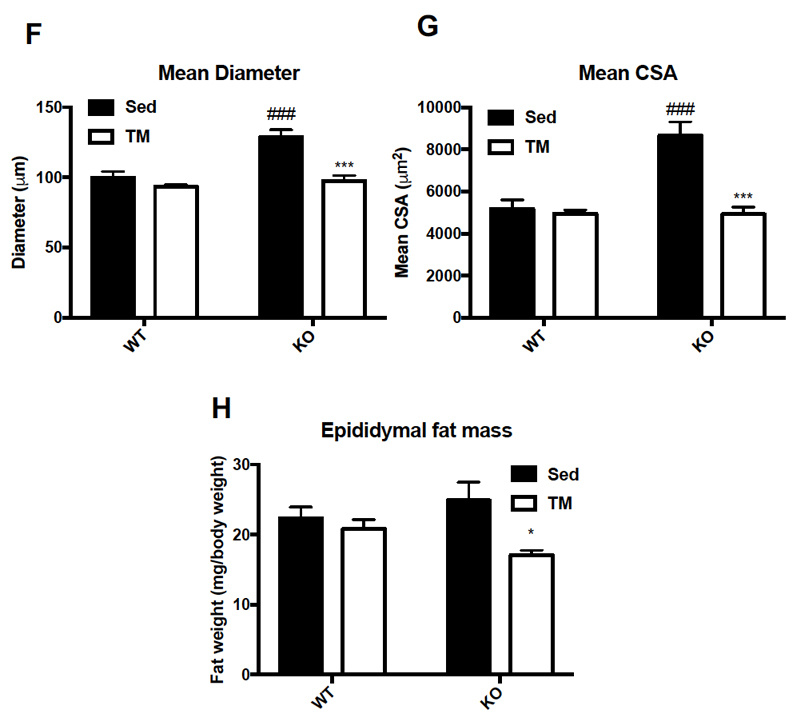 2. AMPK FKO Decreases AMPK and its Downstreams in Epididymal Fat 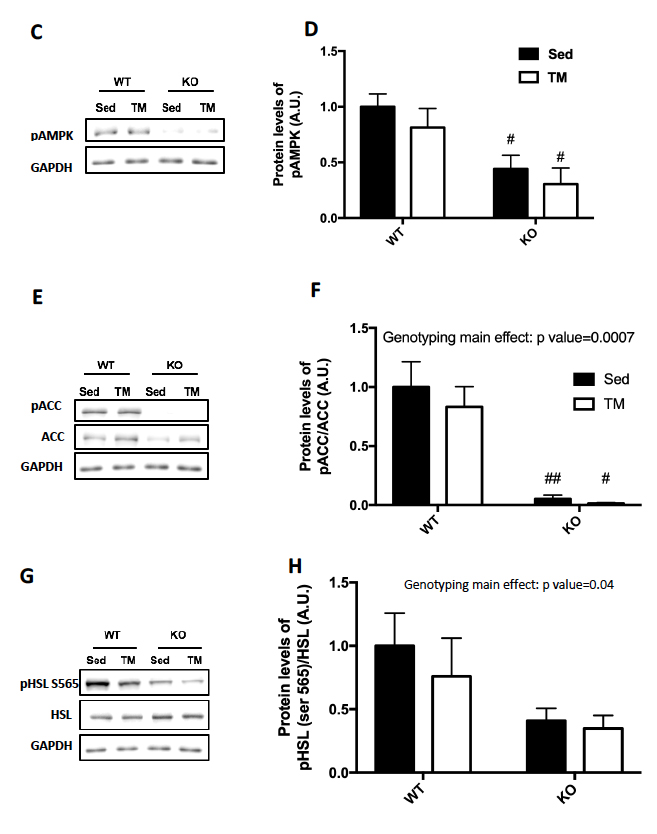 After 5 weeks of training, a glucose tolerance test (GTT) was administered to the mice in order to measure glucose homeostasis. The GTT demonstrated that FKO mice had significantly improved glucose homeostasis throughout 120 minutes (A).

Figure 3: (A) Glucose tolerance test (GTT) was performed by injecting mice with 2g of glucose/kg of body weight after overnight fasting and measuring blood glucose levels every 15 minutes for 120 minutes and, (B) those results were quantified. Data are means ± S.E.M, n=4-5/group. # indicates P<0.05 and ## indicates P<0.01 vs. WT. 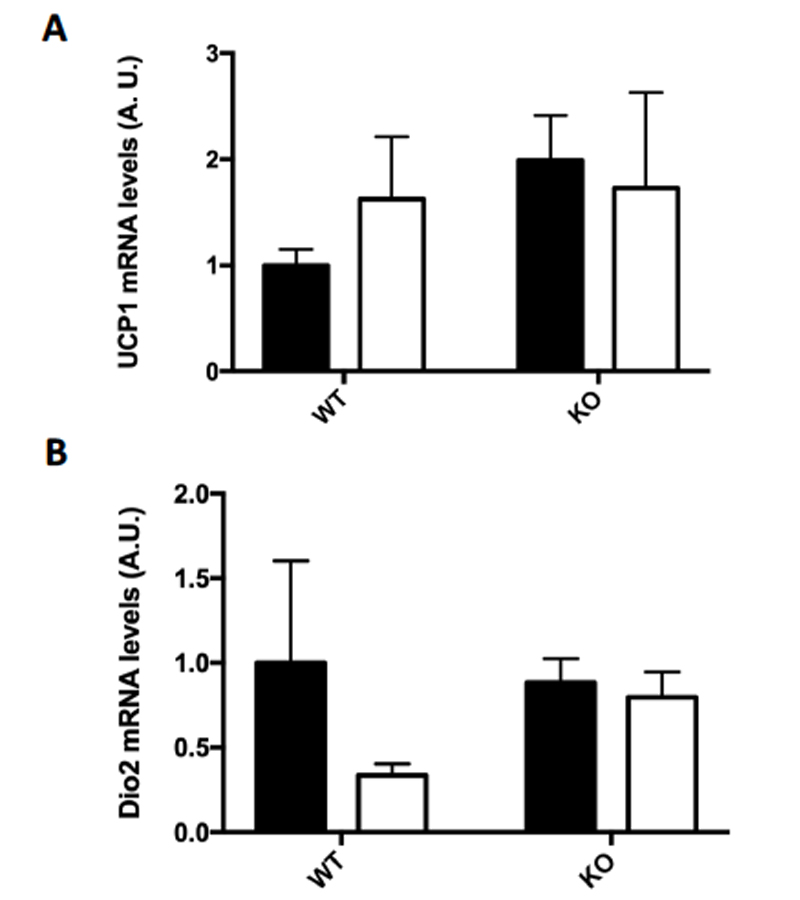 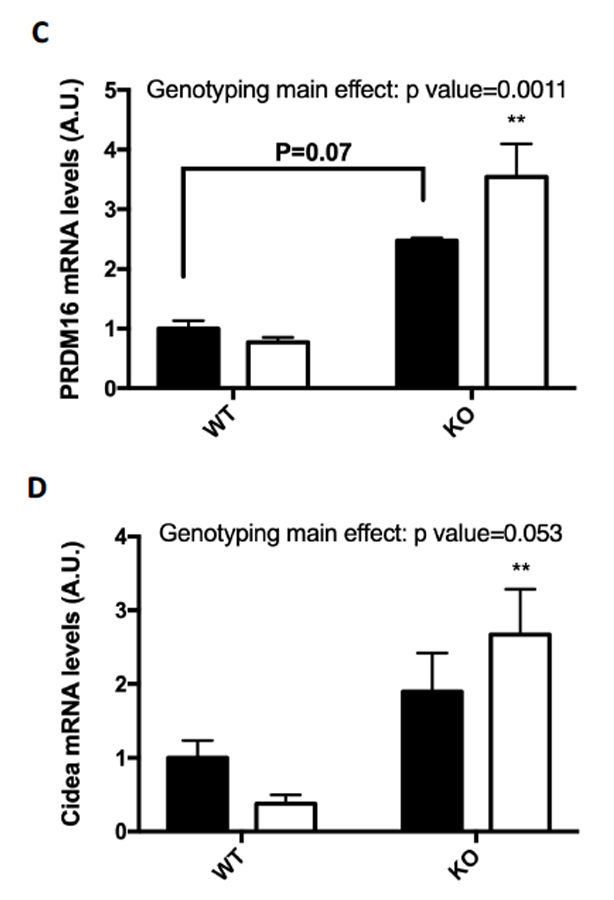 Type II diabetes, cardiovascular disease, and obesity are metabolic disorders with a high prevalence in the United States. Recently, developments in metabolic metabolism research have led to a greater understanding of adipocyte development and differentiation, marking a new treatment option for these metabolic diseases (Walden, Hansen, Timmons, Cannon, & Nedergaard, 2012). The results of this study demonstrate that the knockout of AMPK in adipose tissue significantly improves body composition by reducing percent fat mass and increasing percent lean mass with consistent aerobic training. Unlike subcutaneous fat, in which our lab has demonstrated that the knockout of AMPK decreases adipocyte size in both the sedentary and trained groups, FKO of AMPK has increased adipocyte diameter and cross sectional area in epididymal fat in the sedentary group. However, this increase of adipocyte size was completely ameliorated in the exercise group. In fact, AMPK FKO combined with exercise significantly decreased epididymal fat pad tissue mass. These results demonstrate that the knockout of AMPK can provide an effective treatment against obesity when combined with exercise by significantly decreasing adipocyte size and overall fat mass in patients.

AMPK is known to play a role in energy balance, it has been suggested that the manipulation of AMPK levels could play a significant role in the development of pharmacologic treatments for type 2 diabetes, and metabolic syndrome (Towler & Hardie, 2007). In addition to AMPK’s effect on fat metabolism, our results demonstrate AMPK’s regulation of glucose metabolism and homeostasis. Indeed, in the current study, AMPK FKO mice demonstrated significantly improved glucose homeostasis over a period of 120 minutes post-glucose injection, suggesting that the knockout of AMPK could improve glucose uptake and decrease insulin resistance in patients. As such, downregulating AMPK in adipose tissue could serve as a beneficial treatment for type II diabetes by improving the sensitivity and metabolism of glucose in patients.

Adipose tissue is composed of adipocytes that store energy in the form of triglycerides. When energy is needed, such as during exercise, lipolysis begins, resulting in the breakdown of triglycerides into free fatty acids to provide fuel for working skeletal muscles. Humans have three types of adipocytes: an energy storing white adipocyte found in traditional white adipose tissue (WAT), an energy burning brown adipocyte found in brown adipose tissue (BAT), and a third “beige” or “brite” adipocyte that appears in WAT but retains the metabolic activity of BAT (Ohno, Shinoda, Spiegelman, & Kajimura, 2008). Both BAT and beige fat are actively involved in thermogenesis. It has been shown that increasing thermogenesis is one method to increase basal metabolic rate and thus, increase daily energy expenditure, providing an attractive alternative mechanism to counter the obesity epidemic (Whittle et al., 2011). The present study demonstrated that the knockout of AMPK in epididymal fat significantly increased several browning markers when combined with exercise. This suggests that reducing the expression of AMPK in the fat could serve as a treatment for obesity by inducing thermogenesis as a result of increased brown fat activity.

In conclusion, these results suggest that the knockout of AMPK could serve as a valuable therapeutic treatment for several metabolic diseases, including obesity and type II diabetes, in addition to other diseases heavily-linked to obesity such as cardiovascular disease and fatty liver disease. One limitation in the applicability of this study would be the ability to perform this knockout of AMPK in human adipose tissue. However, this could be overcome by the development of pharmaceuticals designed to inactivate AMPK or its upstream regulators, thus downregulating its effects. Future studies are needed to investigate the underlying mechanisms of signaling molecules such as AMPK that can cause these beneficial phenotypic changes.

Alec Michael Giakas is currently a second year medical student at the University of South Carolina School of Medicine in Columbia, SC. He received his BS and BA from the University of South Carolina Honors College as a member of the BARSC-MD program. Alec completed two years of undergraduate research in Dr. Ho-Jin Koh’s Molecular Metabolism Lab in the Department of Exercise Science examining the effects of AMPK on different aspects of metabolism. Alec has also worked on studies examining the relationship between chronic pain and suicide; the effectiveness of locking the intramedullary set screw in intertrochanteric femur fracture repairs; the relationship between gum disease, small-vessel disease, and cerebrovascular accidents; and the prevalence of foot disease in diabetic patients.